J.J…..Jamaican Me Crazy With Your Cute Self!

in Barks and Blooms / dog walker / J.J. / Jamaica / Jamaican Me Crazy / Roundhill  by Sandy Kempton August 1, 2013
One of our Fabulous walkers Tracey shared this story with us and I couldn’t help but pass it along to you…
“Our family has had a home at Roundhill, Jamaica for about 20 years.  A few days before we left for vacation, we received a call from one of our staff who said they thought a dog may have had a litter of pups under the foundation.  They made sure water and food were available in case the mother was still around.
When we got to the house, we could hear the pups crying but could not get to them.  There were two, one was all black and one was black and white.  One night they cried all night long and we were heartbroken because we could not get to them.  The next day our gardener found the black and white puppy, who must have crawled out of his birthing place.”
“Our gardener said he was pretty sure another gardener from one of the surrounding properties had the black puppy.  My daughter, my son, and the four other kids with us immediately took over care of this sweet puppy and discovered it was covered in fleas.  However, it was nice and plump so the mother did a good job taking care of them until she abandoned them.  The girls gave the puppy (that they named JJ) a bath; combing and de-flea-ing him until he was shiny and smelling good.” 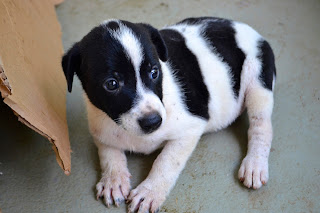 “Our cook Jerome, who had just lost his dog, named Whiskey, asked if he could have him.  Of course the girls wanted to bring JJ home, but that wasn’t possible.  Jerome wants to change JJ’s name to Scotch.   We are going back to Jamaica in November for a delayed celebration of my 50th birthday so I should see JJ “aka Scotch” and will update you with a picture. We miss him already!” 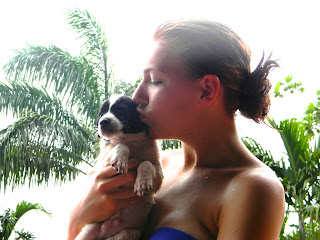