Something To Crow About

in Uncategorized  by Sandy Kempton February 19, 2013 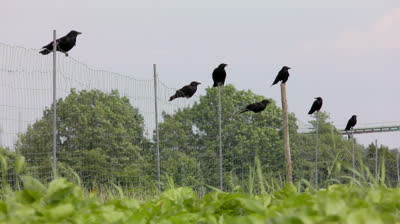 One of our walkers Melanie, noticed a crow that was obviously in need of help during one of her regular dog walks. One of his wings was dangling in a weird position and he couldn’t fly.   She came back later with a shoebox and a sheet so she could take him to a lady that cared for wild birds. Once he was in the box, she was hoping that he wouldn’t get out of the box while she was driving!  He never moved and she feared she had killed him by taking him in.  When they got to the bird lady’s house, he hopped out of the sheet, over the box and straight to the window.  Melanie looked out of the window and there were a million crows all over–on the fence, in the yard, on the telephone wires–everywhere.  And they were caw-ing their little birdy hearts out.  His buddies were keeping an eye on him!